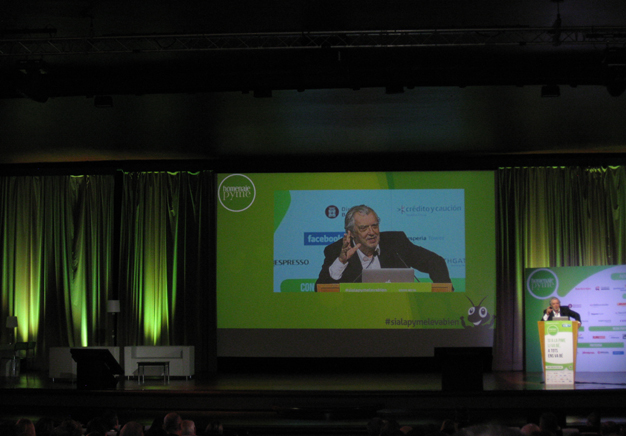 Yesterday we were invited to the event “Homenaje Pyme” held at the Palacio de Congresos de la Feria de Barcelona. Several personalities welcomed the event and welcomed the large attendance of businessmen and businesswomen . As the highest authority , Ms. Joana Ortega, Vice President of the Generalitat of Catalonia , addressed the audience on behalf of the President, Mr. Artur Mas, who excused his presence to the for being on an official trip.

The publicist Joaquín Lorente was commissioned to open the program and in just over 45 minutes He was spoken about creativity in SME.
He noted that the Ambition is what starts enery process , meaning ambition like the question or set of questions established by ceo of SMEs in front new challenges or situations, and Creativity is the answer to these questions because is the launcher of the processes to meet the needs raised.

He also he told us what for him are the four fundamental to achieving success stages: to Defining (what we want to do) , Observing (on the street , in the markets, everywhere  we can obtain first-handed references of the project that we have defined) , Breaking (to give new answers to new or old needs) and Adding (the different elements of creativity and ambitions with the answers to these needs).

After several rounds of conferences and networking sessions, the event was closed by Dr. Industrial Engineer and author of The Ninja Crisis , Mr. Leopoldo Abadía .